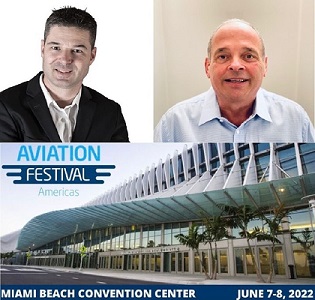 Daniel Friedli and Marc Rosenberg of our strategic partner Oystin Partners will play an active role in the Aviation Festival Americas.

Daniel will host the session “Personalization and Segmentation: How much is too much?” on June 8. Marc will run the panels “Alternative  Ancillaries: How are airlines getting a greater share of travel wallet” and “Modern Distribution: From NDC to GDS and What is the best distribution mix for you and your customers”, both on June 7. So register and participate. We are looking forward to your contribution to the discussions.

While many airlines had lofty ambitions, most would admit that they have faced challenges in growing their distribution volumes via the New Distribution Capability (NDC) as quickly as they would have liked. An aspect that is increasingly important is the role of NDC aggregators, the bridge between supply (airlines) and demand (sellers). Travel in Motion’s (TiM) founding partner Daniel Friedli took a deeper look into the value added by NDC aggregators and general challenges to NDC adoption. Through a comprehensive survey with aggregators as well as interviews with IATA, airlines, aggregators and sellers, TiM explored what works well, and what does not. The paper should help airlines, aggregators, sellers and NDC solution vendors address these issues and find solutions at an early stage of the project and implementation.

With the advent of the trend towards digital retailing in the airline industry, and the desire for airlines to become the sole source of the offer, there has also been a lot of discussion related to dynamic pricing. This paper aims to demystify some of the concepts and definitions of dynamic pricing and take it a step further – to dynamic offer creation.

It is a good time to look into the crystal ball. Technologies such as artificial intelligence, cognitive intelligence and machine learning – all somewhat related – are on the rise. Concepts such as segmentation, personalisation and contextualisation in airline offer creation are taking shape, and in some cases are quite advanced. With the increasingly competitive market and uses of new tools and channels to make offers and sales, airlines need to rethink their understand of the competition and get a better view on the customer’s needs and desires.

This white paper is targeted at an airline audience, particularly decision makers in the commercial and distribution departements, including the revenue management, pricing and ancillary disciplines of the airline. It gives a view beyond what is done today, to look at what will be possible tomorrow. It gives insight into the potential gains that artifical intelligence might bring, and uncovers the benefits of clever use of data and smart algorithms. The objective of this paper is to clear some fog over the the often-misused term “dynamic pricing”, and to trigger discussions amongst business collegues on the subject. Perhaps it will also spark some thoughts and ideas on your own airline’s future concepts related to getting the best offer to every single request, every time and all the time.

White Paper: An Outlook into Airline Retailing in 2018

This past year has seen considerable activity in airline travel distribution in what has been an effort for many airlines to initiate a change to a more retail-focused behaviour. This is not a change forced by airlines, it is brought upon airlines by consumers, digitalisation and the retail market. We are all aware that most airlines cannot make the change alone. Many will be reliant on various industry entities engaging in this shift, and require time. This is nothing new, and the Diffusion of Innovation theory, originally set up in the 1960s, already separated the market into categories of innovators, early adopters, early majority, late majority and laggards in terms of the adoption curve of innovation. It also states that typically, 100% market saturation of an innovation is only reached some time after even the laggards have adopted the innovation, meaning that this is a lengthy process. However, this also suggests that early adopters will benefit more from these innovations. In airline retailing, many airlines and related travel companies are at the stage of knowledge collection or persuasion, with only a handful within a decision phase, let alone an implementation.

In this Airline Retailing Outlook 2018, we at Travel in Motion (TiM) are not attempting to look into the distant future with a lot of unknowns, guesses and hopes. Rather, we are going to lay out what we see coming in the next twelve months. We are going to look at this from various aspects, and only touch each of these briefly with a number of remarks and predictions – and attempt to forecast things that may not happen as expected or hoped.

This is an opinion piece based on discussions we have had, research we have done and various engagements we are involved in, as well as from following news, trends and conference content.

Further, we have split this outlook into five sections. The first four are a high-level representation of the travel trade, starting from the consumer, the trade partners, distributors and finally the airlines. As a fifth element, we have added a short section on the technology. Technology may not drive the business, but it certainly is a critical enabling element.

White Paper: Corporate travel and the impact of a new distribution standard

The airline supplier and its TMC partners are in the midst of a seismic shift to a platform business model. This new platform model requires that just like Amazon or Airbnb, they can deliver products and services with exceptional precision while optimising operations in an increasingly multi-sided and complex digital marketplace.

This quest for a successful platform business model requires us to leave behind the rigid legacy supply chain dynamics of yesterday and instead foster exchange and co-creation of value whilst competing for revenue and profit source.

Standing by is a liability we can no longer afford and protests such as ‘it’s too costly to be competitive’ or ‘this is too much disruption’ will only open the door to those willing to challenge the establishment and reinvent industries.

For the airline, corporate travel represents a significant revenue and profit source. Yet this is a market segment with which they have limited contact, limited opportunities to listen to and understand needs, and even fewer opportunities to sell the ancillary products and services in which the airline makes huge investments in the form of premium cabin services, lounges and other premium products. This is all the more important as airlines move to a world of dynamic pricing and offer management.

While early in the adoption cycle, NDC standards and the digital commerce systems needed to support them can transform how airlines and travel buyers exchange value across the digital ecosystem in service of the corporate customer.

We are delighted to sponsor this important paper by Travel in Motion and Festive Road, which explores the challenges and opportunities from both the airline and corporate perspective. It bears witness to the start of an important dialogue and a path forward that will foster exchange and co-creation of value for all.

White Paper: An Airline’s Transition to a Digital Retail Environment

This white paper is targeted at an airline audience, namely decision makers in the commercial and strategy business departments. It serves as a discussion starter, not a full solution recipe to the digital transformation. The objective of this paper is to ignite conversations related to digital and retail transformation in the lunch break, over a coffee, the a,ernoon tea or a few drinks in the evening.

Airlines have spent the past years focused on becoming travel retailers. They not only invest considerable time and money to come up with new ancillaries and services to sell to their customers, they have been focusing on cross- and upselling hotels, cars, tours, insurance and many other products. Any opportunity to add revenue to the bottom line is being looked at closely, especially with the changes in the distribution landscape of recent. This will be accentuated even more as we see the oil prices increase again.

An opportunity which has been missed by most is staff travel. “STAFF TRAVEL!?” you ask? Yes. Instead of this being a cost centre for the airline, it can also be a source of revenue. In other words, since staff travel, a much-liked employee benefit, costs the company money in several ways, then is it not worth considering how these costs can be offset? Especially if at the same time, staff travel can be enhanced, and costs reduced. Staff Travel could be seen as a part of the platform economy – share the benefits. So a further question should be “Is it worth investing in a platform?” and “Is there really a platform economy for Staff Travel?”.

In this white paper, Travel in Motion outlines opportunities for airlines to enhance staff travel in terms of cost savings, revenue generation and customer/employee experience.